The controversial matter of government’s issuing of contracts by direct award, as opposed to the tendering process was the subject of heated debate in parliament on Thursday. The member of parliament for Castries South East was at the heart of the debate, as he accused the opposition of being hypocritical on the matter.
Read more

A beach education and action campaign by the National Conservation Authority has ended with student designed, conservation themed Trash-bins being placed on beaches in the north of Saint Lucia.
Read more

SLTU PRESIDENT EXPRESSES PRIDE IN MEMBERS ON SIDELINES OF AGM

St. Lucia Teachers Union President Julian Monrose heaped praise on his members on Thursday, for their recent firm stance on salary negotiations with the government negotiating team. HTS News4orce spoke to Monrose on the sidelines of the union’s Annual General Meeting on Thursday.
Read more

St. Lucia has joined Jamaica, Haiti and The Bahamas to recognize self-imposed interim Venezuelan President Juan Guiado’s choice for ambassador to the Organization of American States (OAS). It is the third OAS vote regarding Venezuela which shows a split CARICOM.
Read more

WHILE ITS PRESENCE IS NOT UNUSUAL, H1N1 CAN LEAD TO THE DEVELOPMENT OF SEVERE ILLNESS IN HIGH RISK GROUPS.
Read more

PM On Ubaldus Raymond Issue: “I Must Have All The Facts!” 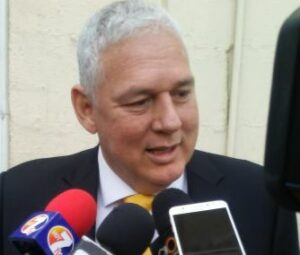 Prime Minister Allen Chastanet, responding to questions from reporters about the controversy surrounding Public Service Minister, Doctor Ubaldus Raymond, has declared that he must have all the facts. He said it was not having any impact on the budget presentation. In terms of the impact on Saint Lucia’s image, Chastanet expressed the view that it […]

The post PM On Ubaldus Raymond Issue: “I Must Have All The Facts!” appeared first on St. Lucia Times News.

Press Release:– The Saint Lucia Air and Sea Ports Authority (SLASPA), can confirm an incident aboard the MV Baltis Klipper berthed at the Castries Seaport at approximately 12:15 p.m. on Thursday, April 11. Operations were suspended immediately following the incident to ensure the safety of port users. Mr. Wilson A. Joseph, a stevedore employed by […]

By Melanius Alphonse Caribbean News Now associate managing editor melanius@caribbeannewsnow.com PORT-AU-PRINCE, Haiti — Haitian President Jovenel Moise on Tuesday confirmed the appointment of Jean Michel Lapin, who has served as acting prime minister since March 21, following the removal from office after a mere six months of the government of Jean Henry Céant. Lapin is […]