Pierre On Ubaldus Raymond Controversy: ‘We Have Bigger Fish To Fry!’ 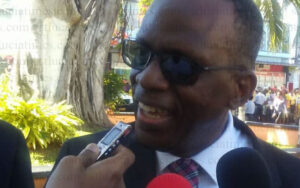 Opposition leader, Philip J.Pierre, Tuesday declared that his Saint Lucia Labour Party (SLP) has bigger fish to fry, when questioned by reporters on the Doctor Ubaldus Raymond controversy. “We have bigger fish to fry – we’re not getting involved in these things,” Pierre asserted. “What we’re dealing with is Guy Joseph and writing a contract […]

The post Pierre On Ubaldus Raymond Controversy: ‘We Have Bigger Fish To Fry!’ appeared first on

Is Ubaldus Still A part of Government?

The post Is Ubaldus Still A part of Government? appeared first on St. Lucia News From The Voice St. Lucia.

Two outstanding young Saint Lucians, in the persons of Rahym Augustin-Joseph from Castries and Lee Ann Edgar from Choiseul, are …

Education Minister Doctor Gale Rigobert says the authorities have tabled for discussion consideration and implementation, a programme that will address security issues in schools. She was questioned bu reporters on the issue of school security outside parliament Tuesday. Rigobert spoke against the backdrop of a break in Sunday at the Gros Islet Secondary school. She […]

The Saint Lucia government has announced plans to intensify efforts at crime prevention and confidence building, by increasing the numbers in the Royal Saint Lucia Police Force. The announcement came from Governor General, Sir Emmanuel Neville Cenac in parliament Tuesday. He was delivering the Throne Speech on the occasion of the fourth session of the […]

Prime Minister Allen Chastanet has responded to reports that a security official at a site in Soufriere slapped a female tourist this week. A video posted on social media shows several persons accusing a man of having struck the visitor after she allegedly starting taking photographs at the location. Questioned by reporters outside parliament Tuesday, […]

The Department of Education would like to inform parents and guardians, who registered their child/ward for Kindergarten for the Academic …

City Police remain committed to the cause

In an era of rapid modernization, the Office of the Mayor along with the City Police Department remains dedicated to …

The post City Police remain committed to the cause appeared first on St. Lucia News From The Voice St. Lucia.

St. Mary’s College pulled off a comprehensive victory over Micoud Secondary by 71 runs as the Department of Youth Development …

St. Lucia’s Parliamentary debate is about to begin, and the estimated expenditure for the financial year 2019/2020 is in the …