Is Ubaldus Raymond on his Way Back to the Fold?

Just when some were convinced they’d heard the last of Ubaldus Raymond, the former senator, who resigned in April, was this week resurrected when a reporter inquired of Prime Minister Allen Chastanet the status of the attorney general’s promised investigation into what had led to Raymond’s demise.

The post Is Ubaldus Raymond on his Way Back to the Fold? appeared first on The St. Lucia STAR.

What have we learned from the Ubaldus Debacle?

A picture of an expensively suited up Brexit Party leader Nigel Farage covered from head to toe in a protestor’s banana milkshake on Monday caught my attention. I wondered: What the hell’s going on in today’s UK politics?

The post What have we learned from the Ubaldus Debacle? appeared first on The St. Lucia STAR.

Ubaldus Raymond shot down . . . now what?

The post Ubaldus Raymond shot down . . . now what? appeared first on

Advice to Ubaldus Raymond: Please get with the programme!

As I walked in to work one day, everyone I passed—from the receptionist’s desk onwards—stared me up and down. I knew the reason I had suddenly become a curiosity had everything to do with a man I met in Barbados while on a media tour.

The post Advice to Ubaldus Raymond: Please get with the programme! appeared first on The St. Lucia STAR.

New government Senator, Francisco Jn Pierre has said that he is at the service of the people. Jn Pierre replaces former Senator, Doctor Ubaldus Raymond. Raymond’s resignation was announced this week in the aftermath of a so called ‘Trini-gate’ scandal involving leaked audio tapes of at times salacious conversations with a female who has a […] 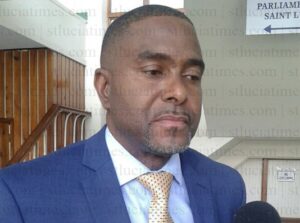 It’s no longer in question. Ubaldus Raymond was informed this morning that his resignation as a senator and Cabinet minister has been accepted by Prime Minister Allen Chastanet.

Superintendent Minister of the Methodist Church in Saint Lucia, Seth Ampadu, has urged Saint Lucians to forgive Public Service Minister, Doctor Ubaldus Raymond. Raymond has been at the centre of a scandal involving leaked audio recordings of at times salacious conversations with a female. The Minister has since proceeded on leave while an investigation has […]

Former senate President Claudius Francis is threatening to disrupt Tuesday’s sitting of the upper house, if Dr. Ubaldus Raymond is allowed to take his seat in the chamber.
Read more

(PRESS RELEASE) — The Government of Saint Lucia has launched investigations into recent information being circulated in the public domain surrounding the Minister for the Public Service and Senator Honourable Dr. Ubaldus Raymond. As a consequence of this initial probe, more information has come to light which warrants further investigations by the relevant authorities. The ...

The post Dr. Ubaldus Raymond “proceeded on leave” while gov’t carries out investigations appeared first on